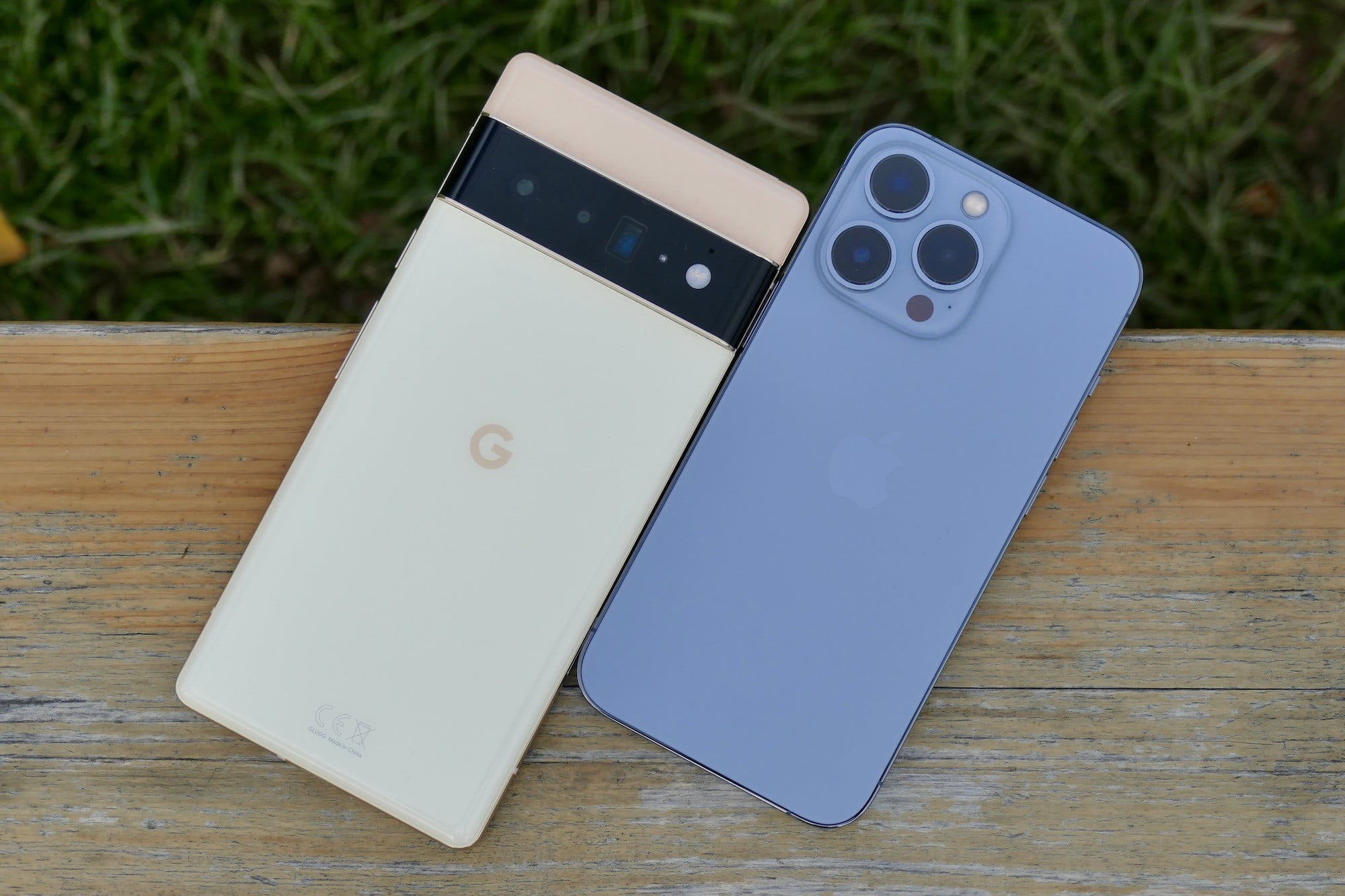 The Google Pixel 6 Pro is officially out, and the first comparison that must be made is with the iPhone 13 Pro Max from Apple.

The similarities are well defined. These are the two leading smartphone systems, Android and iOS. They’re both high-end gadgets with excellent camera systems and custom processing capability.

For comparing we’ve spent a lot of time with both flagship phones, and here’s what we think.

As you can see, the Pixel 6 Pro is much less expensive than its main competitor. That’s a victory for Google right off the bat.

Both phones are attractive, but the Google Pixel 6 Pro has the most up-to-date and hence more noticeable design.

While the iPhone 13 Pro Max resembles the iPhone 12 Pro Max in appearance, the Pixel 6 Pro is unlike any phone that has come before it.

Its split two-tone back panel (in Sorta Sunny, Cloudy White, and Stormy Black) is especially striking, and the full-width camera module offers a pleasingly symmetrical solution to the classic issue of ever-expanding cameras.

As previously said, the iPhone 13 Pro Max looks a lot like the iPhone 12 Pro Max, even though the latter phone marked a significant departure from Apple’s design rut that existed between the iPhone 6 and iPhone 11 periods.

Apple’s super-sized phone, on the other hand, is much heavier than its Google counterpart, weighing 238g vs 210g. Both aren’t exactly light, but the iPhone is particularly so.

Both phones are dust and water-resistant to IP68 standards. While the iPhone 13 Pro Max’s display is protected by a super-strong ceramic barrier, the Google Pixel 6 Pro’s display is made of off-the-shelf (but robust) Gorilla Glass Victus glass.

The flat rim of the iPhone 13 Pro Max is made of quality, gleaming stainless steel and is available in Graphite, Gold, Silver, and Sierra Blue. They’re all fashionable, though a touch subdued for some tastes.

The Apple Pixel 6 Pro sports a considerably less invasive hole punch notch for its selfie camera, while Apple’s famous display notch has been lowered by 20%. Apple’s aperture, of course, contains Apple’s Face ID identification mechanism, which Google tried to imitate with the Pixel 4 but quickly abandoned.

Overall, the Pixel 6 Pro is a design winner, if only because it doesn’t look like any other phone on the market.

Both of these phones have 6.7-inch OLED panels that refresh at 120Hz.

Those higher refresh rates are made possible by the same LTPO technology, which allows the displays in both instances to scale down to 10Hz when the situation calls for it. It’s a fantastic battery saver.

However, it falls short of the iPhone 13 Pro Max in terms of brightness. The iPhone can reach 1000 nits in regular use, and it can reach 1200 nits in HDR operations. Although Google hasn’t provided its data, it’s evident that it’s less punchy in the outdoors.

Overall, the two presentations are similar. To figure out which is the best, we’ll have to experiment.

In contrast to Apple’s Face ID face authentication system, Google uses an in-display fingerprint sensor. Both technologies have advantages and disadvantages, but the fingerprint sensor on the Pixel 6 Pro isn’t the most dependable we’ve tested.

After a period of dominance, Google has slipped behind in the photography market. It’s always had excellent algorithms, but the Pixel 5’s hardware was beginning to show its age.

A 12MP ultra-wide sensor and a 1/2-inch 48MP telephoto sensor with 4x optical zoom support this. Visual and electronic picture stabilization is available on the broad and telephoto sensors.

The iPhone 13 Pro Max, which is probably the most incredible camera phone on the market right now, poses a serious challenge. Thanks to a trinity of 12MP wide-angle, ultra-wide-angle, and telephoto sensors, it earns this accolade.

All of them are bigger than before, taking in considerably more light, and Apple has carried over its sensor-shift stabilizing mechanism from the iPhone 12 Pro Max. This device is a night fighter with an f/1.5 aperture and a broad sensor.

The Pixel 6 Pro also shoots excellent nighttime photos, but you must remain completely motionless for an extended amount of time to get the best results.

Meanwhile, the iPhone’s ultra-wide camera also functions as a macro lens, allowing you to go as close to your subject as 2cm. The telephoto lens has a 3x zoom capability. That’s an upgrade over the iPhone 12 Pro Max’s 2.5x magnification, but the 4x Pixel 6 Pro has it beat.

Motion mood on the Google Pixel 6

Both camera systems include a slew of new software features. The Motion mode on the Google Pixel 6 Pro is intended for shooting creative long exposure photographs of moving objects. Actual tone, which allows for more natural-looking skin tones, is more important – if less visible.

Meanwhile, Magic Eraser helps you eliminate unattractive photo bombers and other distractingly untidy background features from your photos. Even which pieces to eliminate will be suggested by the Pixel.

Photo­graphic Styles are new to the iPhone 13 Pro Max, and they allow you to adjust the tone and warmth of a scene without making it seem odd. If you like, you may even add more Pixel-like contrast to your images.

New techniques on the vedio side

Both cameras introduce some fascinating new techniques on the video side of things. Speech Enhancement is a function on the Pixel 6 Pro that can pick up speech even when there is a lot of background noise.

Cinematic Mode is available on the iPhone 13 Pro Max, allowing you to add Portrait-like bokeh effects to your movie even after it’s been taken. It’ll also follow your subjects’ gaze and change the focus as needed.

With the iOS 15.1 release, ProRes compatibility was included. This adds support for the professional video codec, allowing you to make more adjustments in post-production.

The Pixel’s Geekbench 5 multi-core score of 2760 is well below the iPhone 13 Pro Max’s 4549. That’s a significant difference.

According to benchmarks, the iPhone 13 Pro Max has 6GB of RAM, half of what the Pixel 6 Pro has. However, we now know better than to exaggerate such a discrepancy. How Android and iOS manage memory is just too dissimilar for this to mean anything.

What matters most is that both phones are silky smooth and very responsive in all of the regular practical applications. We can’t fault any of them for anything, from app switching to gaming.

It’s also worth noting that Google’s Tensor chip focuses on machine learning rather than sheer (and often unnecessary) processing power. It’s what, among other things, makes all those creative camera techniques possible.

Both phones come with 128GB of storage as standard. While all phones have a 256GB storage option, the iPhone 13 Pro Max adds 512GB and 1TB storage options. For some reason, the 512GB Pixel 6 Pro Max is only available in Australia.

These phones are 5G-ready and include ultra-wideband processors for precise range and spatial orientation. Both support the 90 FPS mood and are very smooth in gaming like Pubg. However, in graphics iPhone wins because it provides high-quality graphics.

The Google Pixel 6 Pro has a battery capacity of 4,905mAh, whereas the iPhone 13 Pro Max has a capacity of 4,352mAh. That may seem to be a Google advantage, but as we’ve previously said, these two phones manage resources in entirely different ways.

The iPhone 13 Pro Max has the most significant battery life of any iPhone to date. We went through a whole day of heavy use and still had about a third of a tank remaining.

In contrast, the Pixel 6 Pro’s battery life is one of its flaws. It won’t deter you from buying it since it can last a whole day of average use, but it will make you sweat if you use it more rigorously, unlike the iPhone.

When it comes to charging time, none of these phones stands out. The Pixel 6 Pro outperforms the iPhone 13 Pro Max by supporting up to 30W cable charging, while the iPhone 13 Pro Max only supports 23W. Neither business, however, includes a charger in the package. It’s not that noteworthy when comparable phones like OnePlus and Xiaomi have 65W bricks (and beyond) as part of the deal.

Apple’s phone has a 15W Qi wireless charging power; however, Google’s only has 12W power. However, if you purchase a Pixel Stand, that value rises to 23W.

This is where true differentiation may be found. Both phones have excellent hardware, but the most significant difference is likely that one phone is the iOS 15 champion, while the other is the Android 12 champion.

Google’s Android 12 with its new Material You UI is unquestionably the more exciting of the two. This is primarily due to where both operating systems are in their development cycles, but the argument remains the same.

The material you create a lively, colourful interface with a sophisticated system that adapts the whole system’s theming to match your selected wallpaper.

Some of the bold widgets that Google has showcased are also quite lovely.

Apple’s iOS 15, on the other hand, is a minor update to what came before it. On the other hand, Apple has improved its widget game after years of ignoring or siloing them. These two operating systems have been coming closer and closer in recent years if you can believe it.

In terms of consistency, quality, roster, and security, Apple’s App Store remains the greatest of its type. On the other hand, Android users will vouch for the OS’s greater flexibility and customization ability.

Google has provided a convincing alternative to the iPhone 13 Pro Max. It has a unique design, fluid and punchy display, bespoke power, and improved camera capabilities to compete with Apple’s flagship. It’s also a lot less expensive.

However, the iPhone 13 Pro Max takes the lead in terms of pure hardware. Also, It is more powerful, has a better all-around camera system, and has much greater endurance.

In the end, it’ll probably come down to whatever software ecosystem you’re already a member of. Which platform do you prefer: Android or iOS? You can make a sensible choice with confidence.